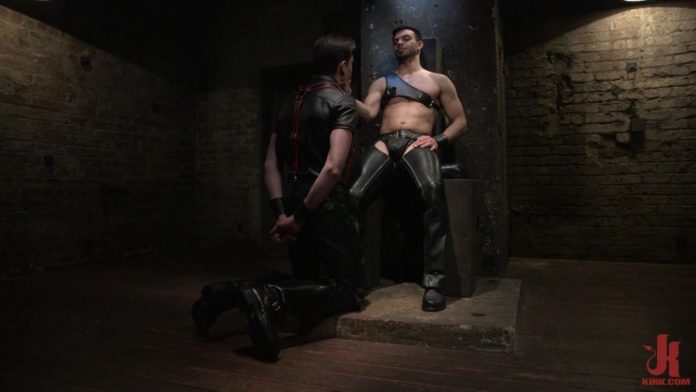 It’s an amazing video for all the fans of gay BDSM and all leather fetishists. Enjoy Jason Maddox & Jack Hunter in this Kinkmen classic video shot for 30 Minutes of Torment. Jason has a new sub to torment, Jack. Wearing leather & a twisted smile, he examines the offering before him, sizing up how much extreme torment this sub can take. Mr. Maddox expects nothing less than full submission, stomping Jack’s pretty face into the ground and teasing his cock hungry mouth with a throbbing hard cock. He plays a cruel game of hard-to-get, one moment facefucking the sub and then kicking him away the next.

Mr. Jason Maddox strings Jack Hunter up with rope bondage in an archway and tests him with his flogger, knocking out whatever will remains with every single blow. He hoists Jack’s legs above the ground and violently plows into his tight asshole. Jack returns to the ground and has the privilege of a short rest on the cold, hard dungeon floor. Ready to fuck again, Mr. Maddox spreads Jack wide open in ropes and shocks him repeatedly with the Tazzapper before going back in for a vicious fucking. He milks a load from his sub as he pounds away and then covers Jack’s face in hot cum.