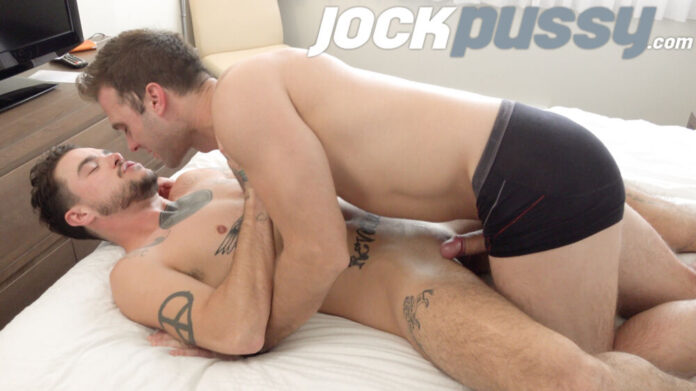 In the third part of their session for JockPussy, Gabriel Clark and Tommy Tanner continue with sensual massage that leads Tommy to climax. Gabriel Clark and Tommy Tanner are lying on a hotel bed together, in T-shirts and jeans, and they’re so smitten with one another they can’t help making out and laughing. Before long, Gabriel has sexy, tattooed Tommy stripped down to a pair of Pump briefs. “I’ll give you a back rub,” he says teasingly, flipping Tommy onto his stomach.

Gabriel starts rubbing Tommy’s shoulders, and he’s so aroused by the sexy guy beneath him that he strips down to just his boxer briefs to feel skin on skin. Before long, he slides between Tommy’s legs, slipping his briefs to one side so he can eat Tommy’s tight pussy. With Gabriel’s face buried between his legs, Tommy moans in pleasure and anticipation, and it’s clear his moans mean, “Baby, I want more!”