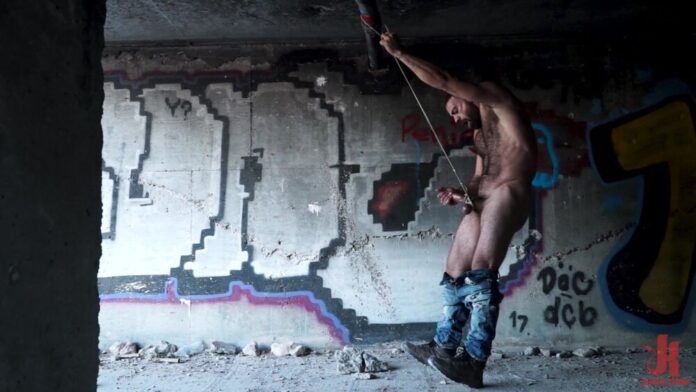 Ricky bends over letting the texture of the rope rub on his wincing asshole as his restrained big dick slaps the side of his muscular thigh. As he stands back up, he feels the load growing in his balls inspiring him to tie his throbbing junk to an overhead pipe to test his limits by nearly suspending his entire body by his dick and balls. Rocking back and forth on his tiptoes, the intensity of his groin alternates between pain and pleasure. Finally when his cum-filled nuts are turning purple and about to explode, Ricky edges himself until he can’t take it anymore.

Ricky strokes his giant cock until blows his load. As he shakes with orgasmic intensity, Ricky unties his dick and balls, allowing all the blood to flood his loins for one last surge of pleasure. Feeling fully satisfied, Ricky pulls up his pants, tucking his happy cock into his stinky jeans and wanders off into the abyss.