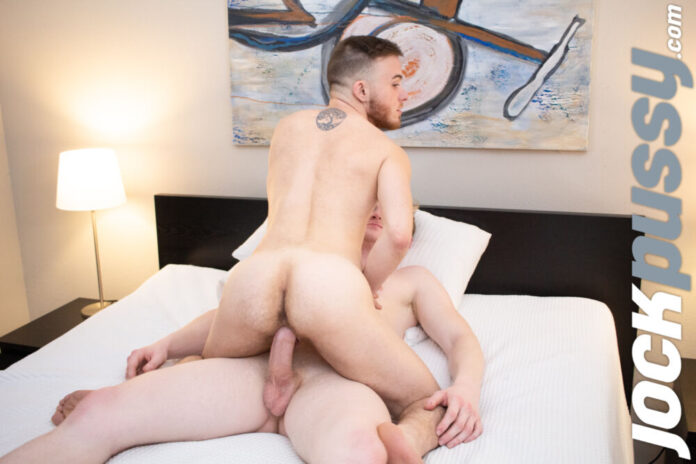 The story of Luke Hudson and Spencer Daley by JockPussy continues with chapter 3. Spencer licks Luke’s pussy and fills it with his raw dick. Spencer Daley is one of those guys you just wanna have sex with. Blond hair, blue eyes, stocky, smooth build, big dick. He’s in a hotel room with Luke Hudson, who’s gotta be the sexiest FTM on the planet! They kneel on the bed, kissing passionately, stripped down to their underwear. These two guys are hot for each other and ready to fuck.

Spencer is soon on his knees with his hungry tongue rammed deep into Luke’s quivering pussy. Luke immediately returns the favor, sucking and deep-throating Spencer’s tasty dick like a true cum-addict. Spencer groans in deep ecstasy. Luke lies on his back on the edge of the bed and raises his legs so that Spencer can slide into his juicy cunt. It feels tighter than it did the last time they fucked. Spencer fucks hard, mercilessly pumping his raw dick into Luke.

Minutes later, the two men reposition themselves, with Luke sitting on Spencer and riding him like a thoroughbred, desperate to get Spencer’s meat nut deep inside his pussy. Spencer pushes Luke onto his back again and kneels between his legs so that he can look deep into the trans man’s eyes. The experience is intense. Spencer goes harder as he gets closer to blasting his load. He pulls out and sprays bucket loads of man juice all over Luke’s sexy, well-defined chest. He pushes his dripping dick back into Luke’s wet cunt, and kisses him in a way that suggests they’re gonna be hooking up many more times in the future!

Browse all scenes by JockPussy>>>