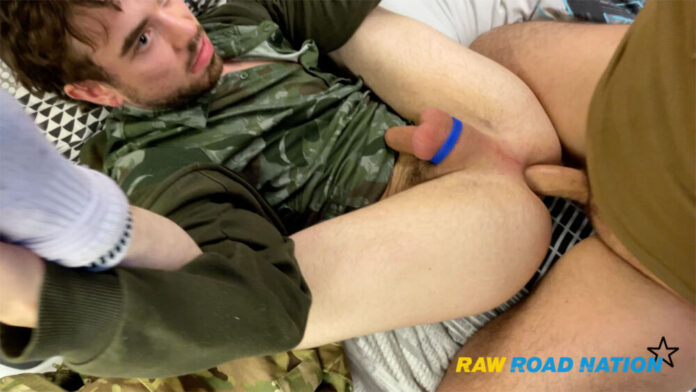 Fresh out of Basic Training, Ollie and Mark are getting horny as fuck as they slide up and down the tank’s impressive cannon. So the two red-blooded soldiers head off to try out some military manoeuvres of their own in private. As luck would have it they bump into Raw Road Nation’s Gang Master and all round cum-craving Essex horn dog Mikey Lee. He’s trawling the streets in his pimped-out fuck truck looking for lads with big cocks and sloppy holes that he can pick up and take for a ride. Mikey invites them on-board and even offers them his bed to fuck on! All he asks for in return is the chance to film all the cum-soaked action on his camera.

Once inside and away from prying eyes, our horned up squaddies have soon released their stiff cocks from their military combats. Snogging each other hard and like dogs on heat they suck down balls deep on each other’s throbbing cocks and greedily slurp up every drop of pre-cum. Ollie spreads his legs and like a slut offers up his tight hole to his army buddy. Mark has been checking out his army buddy’s cute arse all afternoon and dreaming of dumping his thick load up inside. So he doesn’t need any more encouragement and quick as a flash he spits on his fingers, loosens up Ollie’s hole, then shoves his rock hard boner deep inside quicker than a rat up a drain pipe!