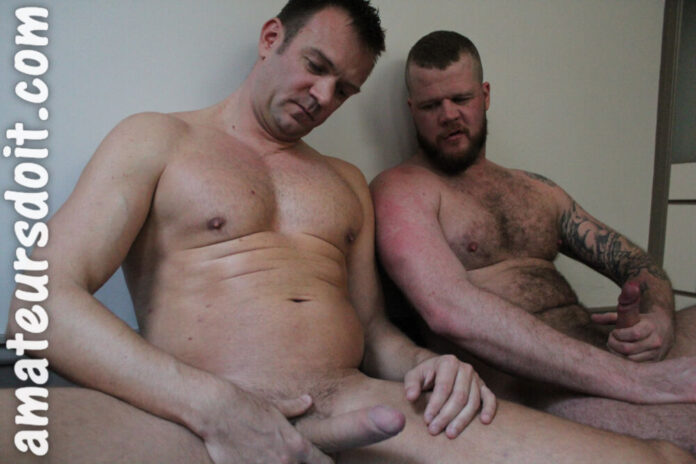 Andrew and Marc are two muscle bears, both of them completely new to gay porn. Watch them sucking each other’s dick in this Amateurs Do It tape. It’s bear-versus-otter in the latest film from Australian Amateurs Do It. Thick-bodied, tattoo-covered Andrew has been paired up with 40-year-old, twinkly-eyed Marc. Both guys claim to be top only, so this promises to be an interesting encounter! The unhurried action kicks off in a shower and continues with the two men being ushered into a room to select boiler suits to wear. We watch as they get used to the feel of their new clothing. Both seem particularly excited by the holes in the pockets which provide easy access to their dicks!

Before long, they’re making out, boiler suits unbuttoned, rock hard, 8” dicks bulging. Andrew drops to his knees and starts to service Marc’s dick like a greedy pig. The guys switch places so that Marc can return the favor. He proceeds to lick, slurp, and choke on the big bear’s mighty meat. The chemistry is off the charts. Marc bends over a table and Andrew uses his rough tongue to give the panting otter’s tight hole a proper work out. The two men sit against the wall jerking off for a while, but Andrew is soon back on his knees with Marc’s long, thick dick rammed down his throat. Both men gasp and groan in ecstasy.

Browse all scenes by Amateurs Do It>>>

See more at Amateurs Do It>>>