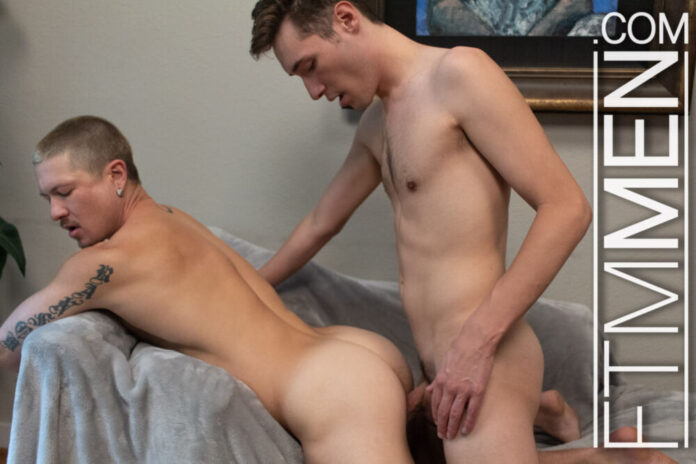 Axel might be taller, but he is in awe of Beaux’s well-defined and sculpted body. As they kiss and touch each other, their bodies seem to gravitate ever closer, sparking intense friction and heat between them, making them all the more eager to devour each other. Axel throws off his pants, giving Beaux the chance to see his massive bulge hidden beneath his white briefs. But before the cis man even thinks to pull it out, he gets between Beaux’s legs to worship his throbbing cock and pussy.

Sucking on the hard knob between Beaux’s thighs, Axel makes a meal out of the trans man’s loins, lapping and teasing at his beautiful erection. Beaux leans back in ecstasy, loving every second of his partner’s service, keenly aware that Axel is stroking himself beneath his underwear. Beaux’s mouth waters as he removes Axel’s last shred of clothing, seeing his member stick out and tempt him. Beaux is hungry to taste Axel’s veiny member, taking it between his lips and down his throat as the cis man reclines on the couch. Axel can hardly believe his good fortune as he watches the beautiful stud bob up and down on his tool, imagining how good it will feel to be fucking him deep in his loins.