Andrew Miller doesn’t suggest that sex between soldiers is so popular in the barracks.

New soldier Andrew Miller meets tattooed commander Tyler James who puts Andrew on the bed and shoots 2 cum-filled loads in his hairy ass. Andrew had just been sent to Tyler’s division. He is a gunner and likes to handle large weapons. Well, this time he will handle a slightly different type of weapon, but he still doesn’t know it. Shortly after his arrival, Andrew is summoned by his commander, Tyler.

Tyler James wants to take Andrew Miller around the barracks and tell him about the basic rules of life there. When the two soldiers find themselves in the bedroom, Tyler says: “I understand you like guns and I want to ask you about my gun,” then he takes off his pants and shows Andrew his cock. Andrew grabs the cock in his arms and says competently “Definitely a good gun. I would use it.”

Tyler James then invites Andrew Miller not to be ashamed to play with his gun. Andrew wastes no time and immediately begins to suck the dick. After Tyler is hard as a rock, the new soldier tells him, “Let’s see how your gun fires.” Tyler puts Andrew on the bed with his legs in the air and starts fucking him from behind. After his penis shoots a sticky load, Tyler says: I think I can shoot again. The two soldiers repeat the procedure, and Andrew ends up with 2 loads in the hole.

Browse all scenes by Active Duty>>> 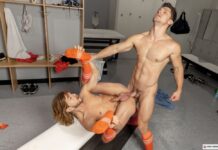