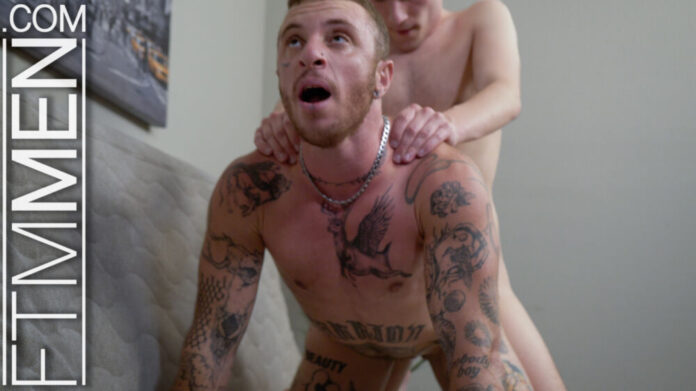 Chance Hart and Axel Black come back to FTM Men for their second encounter where the two studs suck each other before Axel fucks Chance’s pussy. While Chance Hart looks like a total bad boy, Axel Black couldn’t be more of the boy next door. Wavy brown hair, smooth skin, no tattoos, and a lean, athletic body. He’s an absolute dish in his own right but paired with the pierced and inked Chance, it’s a perfect complement of opposites.

While they may not look at all alike, it’s their shared chemistry that matters most. Axel’s lips can barely get away from Chance’s as he paws at his butt, pulling off clothes to get a better feel for one another. Chance lends a hand, taking off his partner’s shirt and pants to bring them down to just their underwear. They fall back on the couch, needing to get off their feet to fully free themselves of their clothing. Chance grinds himself into Axel’s crotch, feeling his rigid member begging to come out. But before it does, Axel gets between Chance’s legs, lapping at his warm, wet cock, sucking on it and making it harder.

Chance loves how the handsome boy’s face looks between his thighs, and he especially loves how his tongue feels on his hole. Ravenously the young man devours him, bringing him to the edge of climax, but not before Chance has the opportunity to return the favor. Axel gets up on the couch and Chance bobs up and down on his shaft, taking him to the back of his throat and getting his member slicked up and wet. Axel even puts his hands behind his head and just feels his body gets flooded with pleasure. He could nut right then and there, but he wants to get a deep dicking in before he blows! And Chance’s hole was made to be bred!