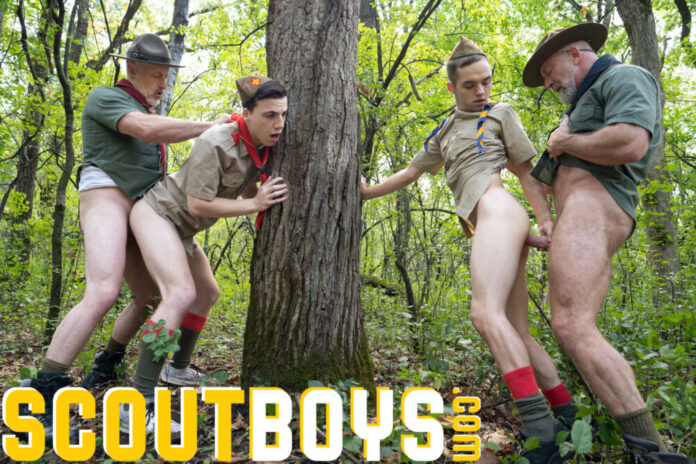 Things are getting hotter at ScoutBoys where power bottoms Troye Jacobs and Marcus Rivers get fucked by Lance Charger & Korzark Kipling. The two scoutmasters were caught – very much in the act – by two young scouts, Marcus and Troye. These boys aren’t quite as innocent as their cute, youthful demeanors would have you believe. Smith and Charger have heard the rumors; both boys have been the regular play things of some of the other Scoutmasters.

Charger was on his knees sucking Smith when the boys arrived. Smith could see them hiding behind a tree and, cool as anything, simply clicked his fingers and told them to stop watching and join in! The boys were soon on their knees, mouths keenly wrapped around the Scoutmasters’ monster dicks. These well-trained scouts certainly saw it as their duty to pleasure the older men. The four of them rapidly became a seething, seedy mass of sexual excitement. The boys were thrown against a tree while the older men fingered and tongued their tight, trembling holes.

The Scoutmasters fed their giant cocks to the boys and were soon well-and-truly using them. The scouts, in pure ecstasy, trembled uncontrollably and begged for more as they were plowed aggressively from behind. The Scoutmasters then switched places and set to work on the other twink, competing with each other to see who could bang with the most energy and intensity. Eventually, there was no other option for the older men but to explode with force and lion-like roars into the boys, filling their tenderized holes with creamy man-juice.