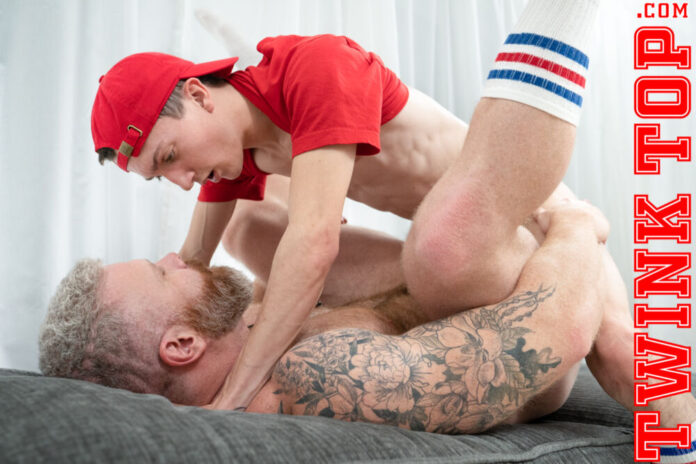 Combine all these things and you’ll understand why by the end of Jack Andram’s training session Coach Marko can’t help but be dripping in tension. He’s been admiring Jack’s twink body, watching it grow and develop through exercise. Today, though, is different. Marko is all horned up by Jack’s lithe smooth body; the gym shorts and tube socks just add to his hunger! While Coach Marko sits on the couch, Jack sits on the floor between his legs. The post-workout rubdown starts at Jack’s shoulders. Marko can see the twink is really starting to relax. The coach rubs a little lower, gently grazing Jack nipples along the way. They’re rock hard. Could it be Jack is just as into this as the big guy is?

Coach Marko rubs a little lower. Jack gently moans his go-ahead and the horny ginger bear slides his hand over Jack’s shorts. Jack’s nipples aren’t the only thing rock-hard. Jack’s sizable twink dick grows with every stroke of Marko’s massive hand. Marko gently plays with Jack’s waistband, then slips his hand inside. With Jack this hard, Coach Makro knows what’s about to go down. Jack’s twink dick is going to scratch the internal itch that the DILF coach has been dealing with. Marko’s throat is just what Jack needs to get good and hard, and Coach Marko is enjoying himself as he gobbles down his shaft!

Marko strips off his tight, clingy athletic wear and positions himself on his back on the couch. Instinctively, Jack knows what the coach needs. With his baseball cap turned backwards and his shirt pulled up over his head, Jack slides his throbbing cock into Coach Marko’s hot and ready hole. Now it’s Coach’s turn to do the moaning!