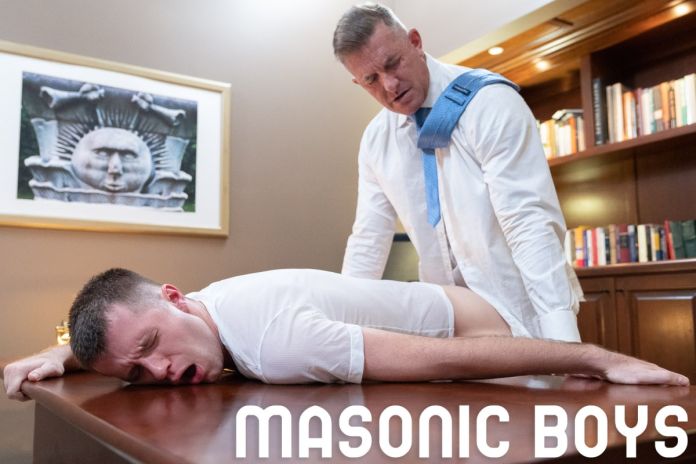 This week from MasonicBoys, Apprentice Maxx Monroe is splayed across the desk of Grandmaster Figata. The salt-n-pepper DILF shows his nervous boy all the pleasures The Order can offer.

Apprentice Monroe found fondness in being stripped by men… undeniable fondness. He dreamed of being touched, stroked, kissed… and not just by any man, but by a man of power, and reverence. A man exactly like Master Figata. Chiseled on the master’s face was the legacy and knowledge of the Order, and with it carried the kind of heat that Monroe melted, and wanted to melt, under. Master Figata’s gentle but firm hands pushed his all-but-willing apprentice across the office table. He gripped Apprentice Monroe’s rear in his palms. The boy moaned as his pale cheeks were spread apart. Figata’s tongue darted in and out of his ass, and weakened him.

He tasted the truth there; a quivering hole cannot lie. He replaced his tongue with a digit, and tested the boy’s entrance for willingness, and flexibility. Monroe moaned incomprehensibly, wordless gasps that meant nothing in English, and everything to the Order. A single, authoritative slap to the rear instructed the boy far more than a direct order ever could have. It told him where to go, and what to do. On the floor, to his knees he fell.

His lips, by instinct, found and lapped at the holy instrument of his master. His head bobbed up and down, cradled in the master’s palm. His throat worked tirelessly. The boy’s tongue was slick, and his mouth wet, and eager. Eager to taste the flesh of a man at the top of the Order, eager for just a drop of the wisdom and strength that comes from up high. The nervous, self-conscious boy that came to his first interview was, in the hands of masters, achieving an understanding of his place within the Order. He was changing, slowly. And it was good—as good as the taste in his mouth.