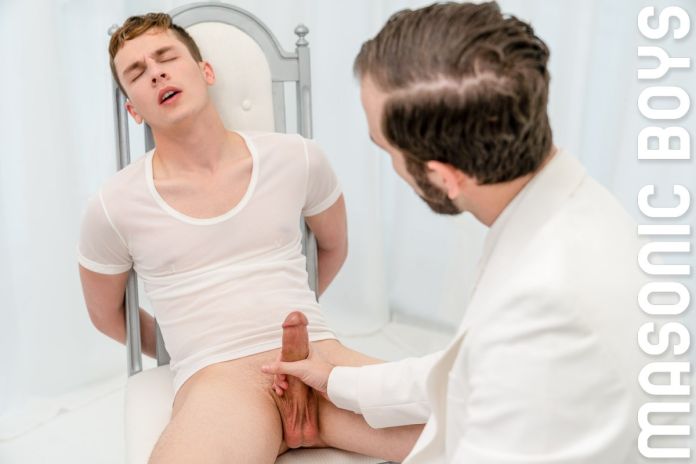 Apprentice Tanner didn’t consider himself to be a shy individual. He normally was out-going and playful with other people. But as he sat in the steel chair facing Master Barrett, he could not help but feel nervous and tight-lipped. And when the older man spoke, Tanner was uncharacteristically unsure of exactly how to answer. The initial interview questions were simple and easy enough to speak about, but the young man found himself mumbling his answers.

Suddenly, Master Barrett stopped speaking. He sat very still in his immaculate white suit and tie and gazed at the young man for a quiet moment. Barrett had some more serious questions to ask the apprentice. And he wanted to know if Tanner could be completely honest with him. Seemingly out of nowhere, the older man asked Tanner if he were sexually attracted to men. The next question Master Barrett asked caused young Tanner to tremble. Tanner found himself tensing up and weakly denying an interest in men.

Unflinchingly, Master Barrett slowly removed his hand from Tanner’s knee and sat back. The older, wiser gentleman took a different tact. Now what he wanted to know was if young Apprentice Tanner could PROVE that he wasn’t excited by the idea of a man’s touch. The boy was both shaken and derailed by this line of questioning. But an answer was expected and so answer he must. Young Tanner could only mumble an affirmation that he could prove not being excited by men– but deep down, the boy knew that Master Barrett could somehow tell that he wasn’t being completely honest.

“Stand up” was the sudden command. “Remove your shirt”. Master Barrett’s enigmatic gaze remained steady and consistent. His dark, soulful eyes remained unreadable even as Tanner’s hands began to shake ever so slightly as he slowly began to unbutton his shirt and take it off. No sooner had Apprentice Tanner handed the shirt over to Master Barrett, when the holy man instructed, “now remove your belt”. Tanner’s eyes widened.

The young apprentice was less shocked by the command than he was by the ever-increasing difficulty he found to not get an erection. Now that his belt was off, the boy could only imagine what was coming next. The anticipation caused Tanner to swallow hard and take another breath. Master Barrett remained perfectly calm and still. He showed no indication that he was aware of the lump slowly growing in the boy’s black dress pants.

If Master Barrett had any misgivings about the bulge in Apprentice Tanner’s pants, he showed no signs of it. “Now remove your pants.”

Before he could stop himself, Tanner hesitated and started to say something, but quickly recovered his composure and promptly began to unzip his perfectly tailored trousers. The young man was acutely aware of how nearly fully erect his penis had become. A natural inclination to hide his erection caused Tanner to blush and make a modest attempt to cover his hardness with his hands, trying to adjust his now fully erect cock inside his skimpy white underwear…