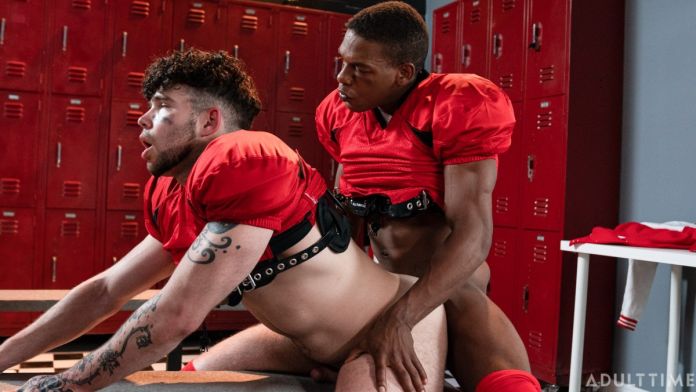 After both being benched mid-game due to a scuffle, a quarterback (Adrian Hart) and teammate (Joseph Castlian) meet in the team’s locker room and explode into an argument. Joseph is new to the team but has been replacing Adrian more and more, and Joseph accuses Adrian of being jealous. It’s not HIS fault that he’s better than Adrian and that Adrian can’t respect their coach’s orders.

But Adrian doesn’t believe a word coming out of Joseph’s mouth. In fact, he accuses Joseph of using his own homosexuality as a way to gain media attention. They’re BOTH gay but Adrian doesn’t play the gay card since he thinks it looks bad for other aspiring gay athletes. Joseph is shocked over the accusation, and things only get more heated from there as they close in on each other, getting in each other’s faces.

As they both try to talk each other down and assert their dominance, the fight comes to a climax as Adrian grabs and pins Joseph to a locker. As their eyes lock, they go in for a fiery kiss, which leads to a wrath-fuelled encounter.

They take turns readily sucking cock and it’s clear that they’re BOTH trying to be the alpha. Even as Joseph bends over and takes Adrian’s cock in doggy style, he still holds his own. As soon as Joseph gets the chance, he switches things up so that he’s riding Adrian, showing that even if he’s bottoming, he’s a POWER bottom.

But once this locker room showdown comes to an end, will the two be able to work together as a team? Or will this be the first of many bitter encounters to come?