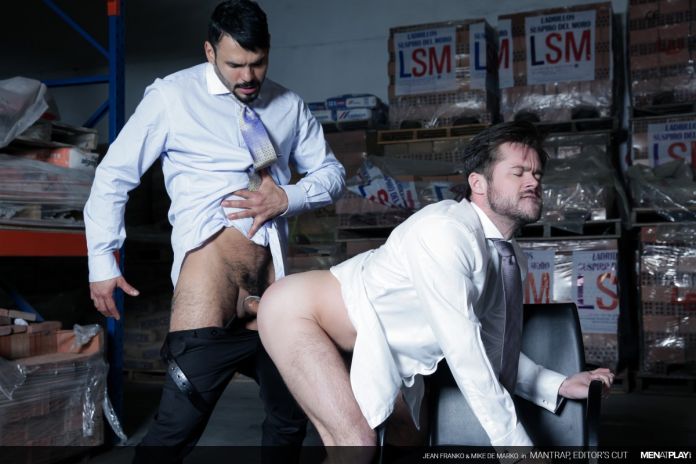 Mike De Marko has received a message to meet someone at a warehouse about a potential job. He enters the warehouse and calls out if anybody is there. As he continues to look around, he is unaware that he is being followed. Latino hunk Jean Franko traps the hazel-eyed man stud inside the warehouse. He ties up Mike but only after he suits him up. When Mike awakes, he sees the suited Venezuelan and hears him whisper: “Finally you have dressed appropriately. It was not easy founding someone your size.”

Jean begins to sensually touch Mike, playing with the defenseless stud. He undoes Mike’s belt and unzips the pant, soon pulling out a hard cock. When Jean pulls out his own uncut cock, the tied-up stud unforcedly sucks it while it gets rammed all the way down his throat. Ready to get his dick inside a warm, tight hole, the dominant top, Jean unties the fuck-toy and fucks him doggy style. After ripping Mike’s shirt off, he signals for him to ride his thick, meaty cock. Enjoying the big cock inside, Mike shoots his load; followed by Jean shooting his all over Mike’s hairy chest.

This rough dick-pounding has all wishing we were the ones trapped!

Browse all scenes by Men At Play>>>