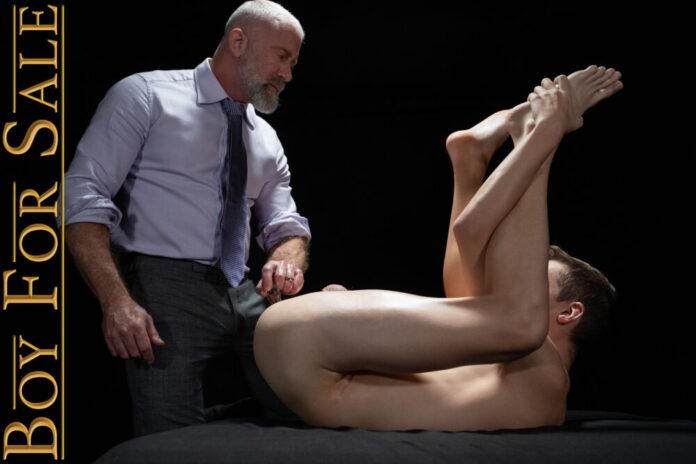 It’s time for the grooming of the newest BoyForSale, Jack Bailey. Lance Charger takes care of it by milking Jack’s cock and dildoing his ass. As soon as I got Jack up on the presentation block, I was delighted with how well he took to his new position. When I took off his clothes, I began to think of him more as a product and less as my flesh and blood. I could see what attracted me to him, yes, but I began to see him as something the buyers would love to.

It took everything in my power not to fuck him right then and there. I wetted my fingers and toyed with his hole, feeling the familiar sensation of his soft, stretchy sphincter around my digit. It fit like a ring, tight but smooth. I knew he would make someone very happy. As I continued to open his hole, tasting it, sniffing it, and feeling it relax on the end of my tongue, I could see Jack playing with his rock hard cock, turned on beyond expectation. He had never been treated like this before. He’d never been with a man who would use him, dominate him, and make him feel like what he is: a slave.

I knew I was going to have to open him up. Really stretch the limits of his hole. It was just the way of it. Not just because I love him, but because he needed to know what it’s like to be taken by a man of my position: a master. It would be rough, and a little scary, but it would be the ultimate test of potential. If he could handle that, he’d be well on his way to being someone’s prize possession…

Browse all scenes by Boy For Sale>>>

See more at Boy For Sale>>>