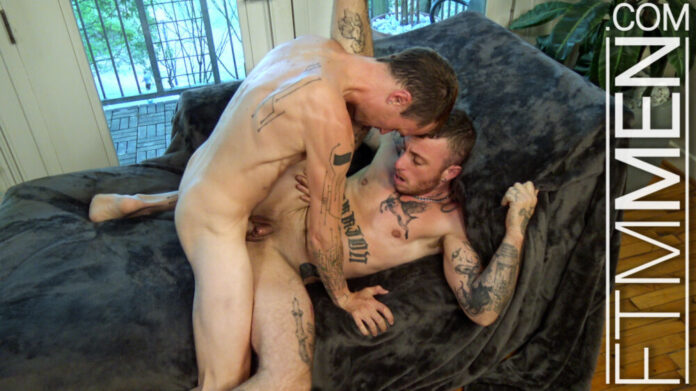 This week at FTM Men, trans stud Chance Hart bottoms for Tommy Deetz. Tommy sucks Chance’s pussy before penetrating it with his raw cock. Tommy kisses Chance with a fiery hunger that his partner is happy to return. Their tongues move about like dancers, gracefully exiting the other and making their pulses hasten. Chance manages to get his hand on Tommy’s crotch, feeling the swelling of his cock beneath his jeans. Tommy is happy to open up for the horny stud, and finds he’s similarly inviting of his own loins. Tommy slides a hand inside Chance’s pants and gets a first feel of the hot wet pussy beneath.

Things escalate as they take off their clothes, giving Tommy the chance to bury his face in Chance’s pelvis. Tommy’s tongue works as expertly on his clit as it did his mouth. He finds a rock-hard, swollen dick in itself in the wet clit, sucking on it and kissing it as Chance holds his head in place. The groans and moans of pleasure echo throughout the room, and Tommy’s cock is desperate for release. Pulling out of his pants, Tommy gives Chance a mouthful of his member, feeling it harden and lengthen between the trans man’s lips. Chance is a champion cocksucker and knows how to bring Tommy to the edge of climax without going too far. He wants to make Tommy feel good, but still wants to feel it rage in his cunt.

Putting Chance on his back, Tommy slides his slick meat between the trans man’s pussy lips, watching it disappear into his guts as Chance lets out a deep, guttural moan. The feeling is so intense that Tommy can hardly hold back the urge to plow harder and deeper from the jump. Chance is more than capable of taking it, though. The sexy guy loves a hard, rough, deep dicking. He spreads his legs wider apart to give Tommy plenty of space to jackhammer his hole. In the end, Chance wants that thick load. And Tommy is determined to give it to him!