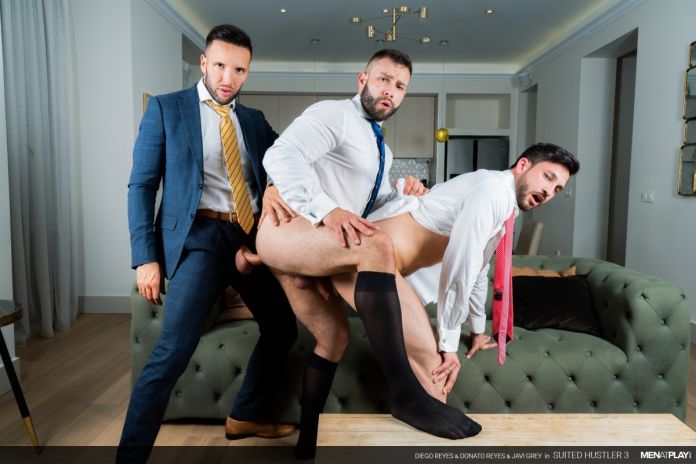 Over the years, partners Diego Reyes and Donato Reyes have tried a few things to spice up their sex life. Donato enjoys roleplay and threesomes, and his mate is generous in fulfilling his fantasies. While Donato is at work, Diego is at home arranging a surprise encounter with a young hustler named Javi Grey. When the hustler arrives, he sees a suit and money on the sofa. Diego sits on a chair, taking a good look at his new plaything. He places his hand on his crotch. Javi sees him and smiles. He tries to get closer to Diego, but he is stopped and instructed to suit up first. Javi obeys and begins to take off his clothes very slowly. The hustler loves the attention and to be used even more so.

When Javi is almost finished suiting up, Diego looks at his phone and makes a gesture for Javi to be quiet, before leaving the room. Donato Reyes has arrived and sees the hustler wearing one of his favorite suits and hard as a rock. That’s enough for Donato to see it as an invitation to play. After a while of the two of them alone, Diego appears in the room with a phone in his hand. He is recording everything and ready to join in on the play session.

Browse all scenes by Men At Play>>>