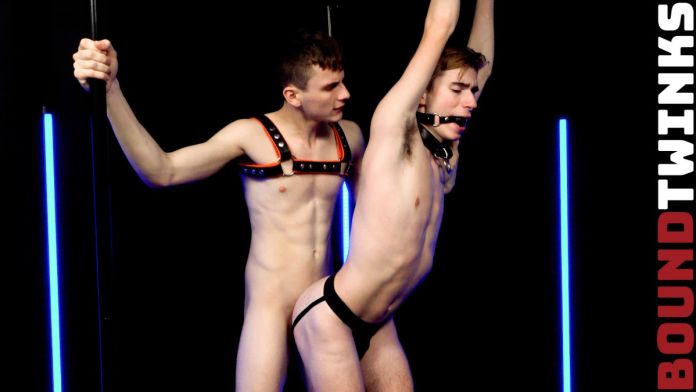 We’re back to the dungeon of BoundTwinks with Tyler Tanner & Ryan Aubert. Sexy dom twink Tyler shows a trussed-up Ryan how the big boys play.

Skinny boy, Ryan has been silenced with a ball gag. His hands tied above his head in a leather strap attached to a chain hanging from the ceiling. He’s naked but for a well-fitting jockstrap and a collar around his neck. Tyler appears from the shadows, dressed in nothing but a leather harness, dick already hard, ripe and ready for action. He immediately takes command, asserting his absolute dominance by fondling, groping ,and smacking the trussed-up, timid twink.

Tyler removes Ryan’s gag and the two boys kiss passionately. Ryan begins to whimper and groan, instantly transported into a state of pure lust, desperate to please his sexy new master. Dominant Tyler re-gags his slave, then drops to his knees, pulling Ryan’s dick out of its jock, deep-throating it eagerly and sending shivers up and down the bound boy’s beautiful body. Tyler positions himself behind Ryan and starts to work his ass with his flickering, slippery tongue and long, bony fingers until the bottom boy is begging for his big dick.