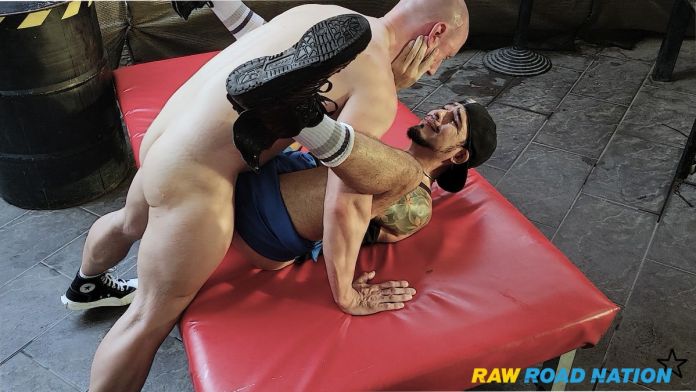 Two fit men get it off downstairs in more ways than one!! The gorgeous tattooed fruity pink-haired bottom is literally **gagging** 4 it!! Real skinhead has been on a shift in just shorts and a high vis with no top! Bet it’s hot sweaty work, cus the shorts came off too leaving him sat bare arsed on the cold barrel. He didn’t give a shit cus all he could think about was exposing his manly member to his boy and ramming it all the way down his throat!!

It’s as wide as his wrist and throbbing like his heart, full to the brim with man cream, dying to bust out any second!! So he pins him down on the gym bench and inserts from above until he’s balls deep in his mouth!! It’s too much for him!!! He chokes and spits everywhere. His bum is even harder, he’s having regrets. Takes about 10 attempts cuz it’s just so huge, he’s never felt anything like it! Many screams later he gets a good rhythm into his arse and slides his cock in and out, real smooth like butter.

His insides are so warm and inviting! It was just a little bit but it felt so good he just couldn’t quit!! The bottom defo grew to like it cause he was kissing him all over, especially his nipples. Bit more fem than what he was used to but he must still be sensitive there as it made him shoot a massive load of manjuice out his cock all onto his pretty face!!